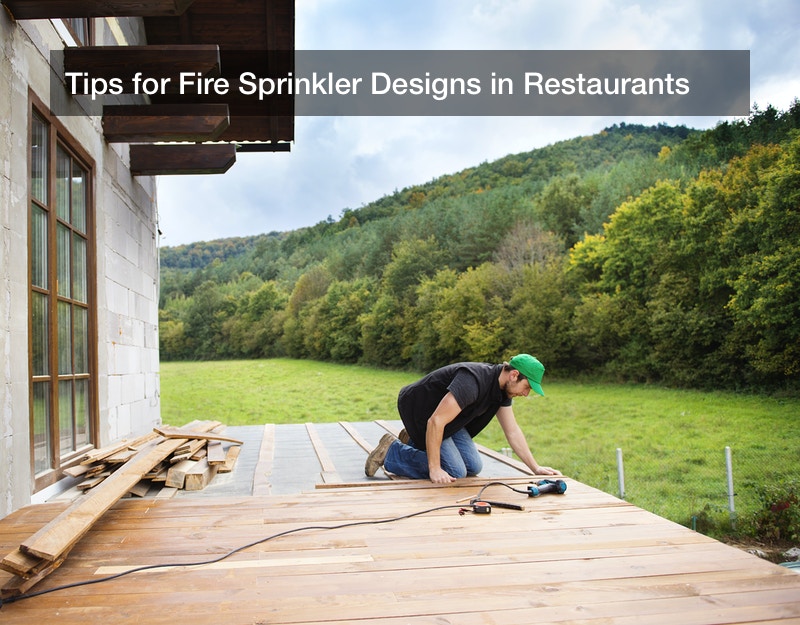 Fire sprinklers play an essential role in reducing the damage caused by fires when they occur. For many years now, fire sprinkler systems have run automatically when there is a fire or smoke. In the United States, this automatic system has been in operation since 1874. With time the technology has improved, and the importance and necessity of these sprinkler systems has increased.

Restaurants are some of the most susceptible places when it comes to fires. With the advancement of technology and demand for high quality and fast services by patrons, entrepreneurs are investing a lot more on their restaurants today than they did before. With these substantial investments in both buildings, furniture, and other equipment, the possible losses that could be occasioned by fires are far much higher now that they have been in the past.

With the reasons mentioned above as the driving force, fire sprinkler design has become quite important. Your restaurant kitchen is one of the places where you need a carefully thought out fire protection sprinkler system installation among other protective systems. With all the fires and flammables in there, the risk of fire is much higher, the fire is likely to advance faster, and the equipment likely to be damaged are more expensive. The following are some factors to consider when putting automatic sprinklers in your restaurant kitchen.

If the restaurant for which the fire sprinkler designer is designing the system is already in operation, it probably already has some firefighting equipment in place. If it is not in process, there could be plans to use the sprinkler alongside other material. The entire system should include facilities such as fire extinguishers, kitchen hoods, fire alarms, fire sprinklers, fire protection services, etc.

If there is more equipment to help with the fire, you can have the sprinklers positioned further apart from each other. If, on the other hand, the sprinklers are the only option fire suppression tool you have, then you need to install sprinklers at closer intervals to ensure more effective coverage of the area.

Plan of the Kitchen

While about 40% of restaurant fires originate from the kitchen, about 20% of these fires have their source at the stove. There are other areas in the kitchen where the possibility of fires is higher to varying degrees. Ducts and other areas where there is an accumulation of grease could also be a danger point for a fire to start.

To decrease the possibility of the fire from spreading, the automatic fire sprinkler design should be such that more heads are concentrated right above the stove, near ducts and around vulnerable electric lines. The temperature at which the sprinklers becomes sensitive should be set in such a way they don’t go off during normal activities in the kitchen.

Type of Food Prepared in the Restaurant

If the restaurant is involved in deep frying and other cooking methods that include grease, there is a higher risk of a fire starting in it. This means that the fire sprinkler design will be different from the one used in restaurants that use other methods of cooking. The concentration of sprinklers and the general outline should factor in this possibility.

The following are some common types of fire suppression systems and their characteristics. The wet pipe system is, by far, the most preferred sprinkler system. This system is simple as it only has a few operating components. The components include an automatic sprinkler and an alarm check component. The water in this system is usually pressurized, and it is delivered automatically when heat levels reach the necessary threshold for release.

The dry pipe system is generally used in places where ambient temperatures are so low that water freezes inside pipes. When water freezes, it becomes useless to a fire suppression system since it can’t melt and flow fast enough in an emergency. The deluge system is best for instances where a lot of water is needed to contain a fast-spreading fire. The water is connected directly to the system at all times, and the sensing device is either disabled or the system is designed that way. A fire suppression system design should consider which method is the best for a particular situation.

« How Companies Can Benefit From Using NTP